Kylie Simonds was diagnosed three years ago with rhabdomyosarcoma, a rare childhood cancer that affects bone or soft tissue. Kylie’s battle with Cancer sparked Innovation with her invention for an IV Pediatric backpack for kids with Cancer.

What will you learn in this interview?
– What sparked Kylie’s innovation?
-How did Kylie keep her spirits up despite her Cancer Treatments?
-Who Inspired Kylie?

FUN FACT:
Kylie wants to be a fashion designer.

Kylie Simonds was diagnosed three years ago with rhabdomyosarcoma, a rare childhood cancer that affects bone or soft tissue. After 46 weeks of chemotherapy, as well as radiation and surgeries, she was issued a positive prognosis from doctors.

Kylie had a school project to come up with an invention. She immediately ran in the door at her house and said, “I know what I am going to do”. Her invention showed so much promise that her teachers submitted the project to the Connecticut Invention Convention where more than 700 other creations were also displayed. Her iv pediatric backpack for kids with cancer beat out the competition and received four awards, including the Patent Award, which forwarded the design to the U.S. Patent and Trademark Office which awarded her a provisional patent.

Kylie was challenged with coming up with an invention through her school and the CT Invention Convention. Kylie immediately knew what she wanted to invent. A backpack that could allow children some mobility while receiving I.V. treatments or infusions.

Kylie’s backpack couldn’t be just any backpack. Because of the fashionista that she is, these would have to be colorful, gender specific, and awesome. She went to work and with the help from her parents designed a backpack.

Kylie’s invention was chosen by her middle school teachers, among others, to attend the UCONN Invention Convention where over 700 inventions were displayed and many selected for awards and recognition. Amazingly, Kylie’s invention received four awards including the “Patent Award”, the highest award at the convention. She even received the only standing ovation of the night. The Patent Award has allowed Kylie’s invention to be submitted to the US Patent & Trademark Office with the sponsor covering all costs. The lawyers have submitted the provisional patent application.

The design incorporated an I.V. pole with a drip bag protection cage. Kids want to move around and we can’t risk the Medicine bags getting punctured or compressed. This cage is customizable with different shapes, like hearts, peace signs, etc. This also makes treatment less scary. I.V. poles are very intimidating to young children. The protection cage is also removable and can be replaced with a child’s choice of design.

The backpack also has the I.V. controller built into the bag to control the flow rate. It is powered by battery which most I.V. machines on a pole are also battery operated. 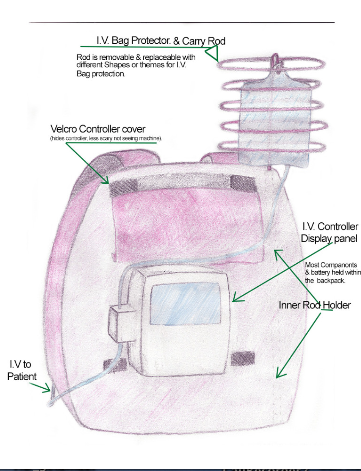 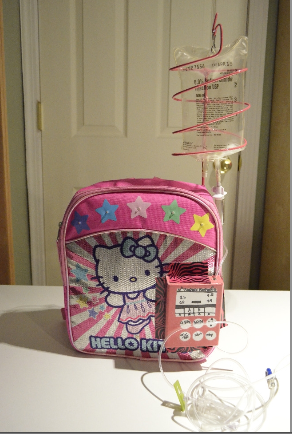