How to Look Beyond Eyesight & the People Telling You What You Cannot Do with Dr. Hoby Wedler, Co-Founder, Senspoint 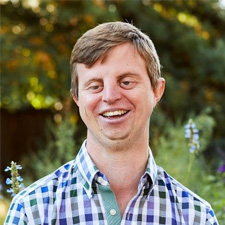 Dr. Hoby Wedler is the co-founder of Senspoint, which has a sister brand called Tucker Branding, and it is a full-spectrum design company with a distinct focus on telling stories to create truly memorable experiences using all five senses.

Dr. Wedler has been completely blind since birth. He is a scientist, a food and beverage expert, and a passionate explorer of anything sensory. Dr. Wedler earned his Ph.D. in Computational Organic Chemistry from the University of California, Davis.

He also founded Accessible Science, a nonprofit organization that held annual chemistry camps for blind or visually impaired students. Dr. Wedler began opening doors to the world of wine aromas by holding truly blind wine tastings in Francis Ford Coppola’s wineries, and he’s conducted these all over the globe.

Dr. Wedler was recognized by President Barack Obama in 2012 when he was named a Champion of Change.

We make a ton of excuses for not doing the best we can, but when you listen to Dr. Hoby Wedler’s story, you will realize that there really should be no room for excuses. Not one. Dr. Wedler is the perfect example of someone who didn’t accept or make excuses. He set the bar high for himself and defied anyone who tried to dictate what he could and couldn’t do. So not only did he major in Chemistry even when people weren’t very encouraging about it, but he actually went ahead and earned a Ph.D. in Computational Chemistry.

According to Dr. Wedler, the secret is to expect the world of yourself and to never let anyone pull you down or box you in. Dr. Wedler exemplifies this belief and approach to life, and he says that his motto is to always challenge yourself to do something that you either dread doing or think you can’t do, and just take baby steps and you’ll get there.

Tune in to this episode of Inspired Insider Podcast with Dr. Jeremy Weisz as he talks with Senspoint co-founder, Dr. Hoby Wedler, about his inspiring story and why he believes that making excuses can pull you back instead of pushing you up. Dr. Wedler also shares some of the remarkable things that Senspoint has worked on, what it was like for the attendees of his blind wine tasting in the Francis Ford Coppola wineries, and how his parents helped him understand the value of setting the bar high.

Dr. Jeremy Weisz here I’m founder of InspiredInspired.com where I talk with inspirational entrepreneurs and leaders. And, you know, I’ve Dr. Hoby. I’m gonna introduce you in a second. But, you know, Dr. Hoby is one of the reasons I started this podcast. He doesn’t even know it. It’s really to capture some of the most inspiring stories, what I consider some of the most inspiring people that I learned about or know, you know, I had a past guest, which is Chris Ategeka. Chris Ategeka Most people have never heard of him, but he started to for profits to nonprofits. And he, you know, at age seven, he became an orphan because both his parents died of AIDS and his oldest five children. And one he was taking his brother to the hospital, Dr. Hoby, and his brother died, and he started a nonprofit to create old bikes and he created like ambulatory bikes, so because in his village, you, you know, it’s a long way to the hospital. And so he actually created that and he wore his first pair of shoes at age 17. He actually ended up he speaks nine languages, he ended up coming to the US and getting his PhD. It was just an amazing, amazing story. I’m not even doing remarkable. I’m not even doing a justice to be honest with you. So check out that and other episodes on InspiredInsider calm. Before I introduce today’s guest, this episode is brought to you by Rise25, which I co founded with my business partner, John Corcoran, and what we do is we help businesses connect to their dream relationships, partnerships, clients, you name it. And we help you do that by running your podcast and you know, Dr. Hoby for me, the number one thing in my life is relationships, I’m always looking for ways to give to my best relationships. And podcasting is a way to do that. And it really was inspired by my grandfather who was a Holocaust survivor and him and his brother were concentrated in concentration camps in Nazi Germany and they were the only members of our family survive. Why am I telling you this? Because he was interviewed by the Holocaust foundation his legacy lives on because of a podcast or not because the price because of an interview, and you know, I put that on my about page of my podcast website. My kids can watch it my when I have hopefully God Willing grandkids can watch it and anyone can watch it. His legacy lives on because of that interview. And that’s what I consider when I have my guests on. So it’s not just relationship is not just business but is actually I believe it’s helping people leave a legacy beyond themselves. So I’m excited to introduce today’s guest in a shout out to Justin Breen. I would not know today’s guests without Justin Breen, Justin Breen. Thank you his book Epic Business you need to check it out. Yeah, BrEpic Communications the foreword was from Chris Voss, one of my favorite authors. I’ve also had him on the podcast have of Never Split The Difference. If you haven’t listened to that book or read it. It is a must must listen to. Dr. Hoby Wedler has been completely blind since birth. He is a scientist. He’s a food and beverage expert and a passion explorer of anything sensory. And you need to watch this TEDx talk. It was phenomenal. I didn’t know he’s a comedian also, but he earned his PhD from UC Davis in organic chemistry. He founded accessible science, which is a nonprofit organization, which held annual chemistry camps for blind or visually impaired students throughout North America. And he began opening doors the world of wine aromas, by holding truly blind wine tastings in Francis for a couple of wineries, and he’s conducted these all over the globe. And Dr. Hoby co-founded Senspoint which is a sister brand called Tucker Branding, and their a design company with a distinct focus. And you guessed it and telling stories to create memorable experience using all five senses with wine, spirits, beer, food and beverage and many others. And most people maybe don’t know about this, Dr. Hoby but us recognized by President Barack Obama in 2012, when he was named a champion of change. And Dr. Hoby thanks for joining me.

Dr. Jeremy This is such an honor I love this this podcast you put together you know it’s it’s just a such a phenomenal way to wait a way to share stories and way to create relationships. And I just love what you said about your grandfather and and having his legacy live on. I do have to ask you must have heard some pretty amazing stories as a child growing up

crazy stories and that’s what I love about your story is like when I think of his story, and when I think of your story, I think when we make excuses. That is just It’s terrible. Like, you know, we have we create excuses. We tell we have self talk, we tell self talk of excuses. And when I think of is sort of like, what is my excuse, what he went through and what he started with, and he came to the United States with zero dollars, and what he would not know in the language in same thing with you the things that you have to that all of us take for granted. And then we have these excuses. And like, I mean, listen, I don’t even know how you, you email me right away, you text me back right away. And like, I don’t even know how you manage everything and do everything. And so I want to talk about I want to start the conversation with people telling you, you can’t do things. Okay. Yeah. And some of those pieces, you know, those points along the journey, where people told you, you can’t do something.