Master Copywriter Don Hauptman: His Greatest Hits and What Made Them Work….

Don Hauptman is an award-winning direct-response copywriter with a 30+ year career. Don may be best known for his headline “Speak Spanish [French, German, etc.] Like a Diplomat!”

This familiar series of ads has sold spectacular numbers of recorded foreign language lessons and generated revenues in the tens of millions of dollars.

He is also the author of The Versatile Freelancer, which shows self-employed professionals how they can diversify into public speaking, training, consulting, and critiquing.

For details on Don’s e-book explaining “how to share what you know—and get paid for it,” go to www.versatilefreelancer.com

He is a ten-time winner of the annual Newsletter on Newsletters promotion award for subscription acquisition packages. For decades, no other writer could match that record.

What will you learn in this interview?
– How does he sum up the reasons for his successes in two words?
– How do you know when a headline or slogan has become embedded into a culture?
-Who is the first client and mentor who launched his career?
-What were some of Don’s most successful campaigns and what made them work so well?

A little background about Don Hauptman:

Don Hauptman was an award-winning independent direct-response copywriter and creative consultant for more than 30 years.

In the course of his career, he’s been a top copywriter, a sought-after consultant, an acclaimed speaker, and a published author. In copywriting circles, Don may be best known for his headline “Speak Spanish [French, German, etc.] like a Diplomat!” This series of ads generated revenues that total in the tens of millions of dollars … and achieved the status of an industry classic.

His winning campaigns are mentioned in three major college advertising textbooks, and examples of his promotions are cited in the books Million Dollar Mailings and World’s Greatest Direct Mail Sales Letters. In a column in Advertising Age, Don’s name was included in a short list of direct-marketing “superstars.”

His work was praised by such direct-marketing legends as John Caples, Eugene Schwartz, and Bob Stone.

A few years ago, Don retired from full-time copywriting in order to focus on other interests, including his passion for “recreational linguistics.” He is a regular contributor to the magazine Word Ways and formerly wrote “The Language Perfectionist,” a weekly column on grammar and usage, for Early to Rise, a popular online newsletter.

Don was an early specialist in marketing techniques for freelancers. He created and presented an acclaimed one-day seminar called “Self-Promotion for the Self-Employed.” Don is author of The Versatile Freelancer, an e-book from American Writers and Artists, Inc. (AWAI) that shows copywriters – and almost anyone – how to diversify their careers into consulting, training, critiquing, and speaking.

Other Honors and Awards

2007: At an international marketing conference in Courtomer, France, an award for lifetime copywriting achievement. 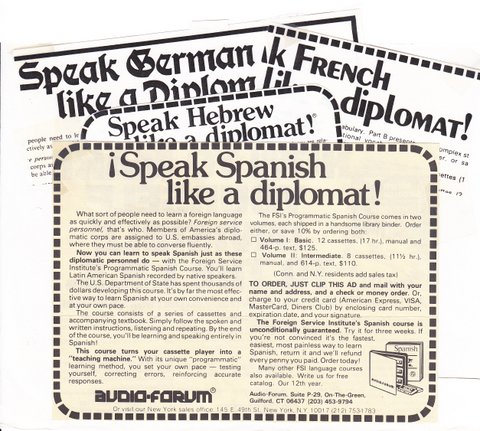